A premonition or the work of the Holy Spirit?

As I get older I have noticed a bit of a “role reversal” in my relationship with my parents. When they travel, I find myself acting like the parent of a teenager. I shake my finger at them and say, “Now you be sure to call me when you get there!” I do this out of love, of course, and because I am generally concerned for their safety and well-being. Recently they took a motorcycle trip to Pennsylvania. Yes, I said a motorcycle trip. Now you know why I dye my hair … to cover the gray! One day during their trip, I was overcome with a sense of fear for their safety. Although I do worry about them, this was different than anything I had ever experienced. I knew it would be several hours before they reached their destination where I could talk with them, so I just kept praying that God would keep them from harm.

Later my mother called me and the first words out of her mouth were “We’re fine.” She didn’t say hello or ask how I was; she just immediately said “we’re fine.” Hearing those words and the tone in which they were said, I knew the next word would be “but …” She continued by saying, “We had a little fire.” Certainly those who know my Mom can hear her sweet little voice uttering those words. A little fire? In my mind, fire is fire, little or not. Fortunately, they had arrived safely at my sister’s home, and this “little” fire on their trike took place while it was parked in the driveway. Apparently, the cause was some electrical short. No one was injured and they were able to get it under control rather quickly. My parents stayed with my sister a few extra days than originally planned while the trike was repaired enough to get them on the road again and back home where it could be completely fixed. It is at their trike shop in Indiana right now and all is well, thank goodness.

I am not sure that I would call my fear for their safety that day a “premonition,” but I do believe that my compulsion to pray for them was the work of the Holy Spirit. I will never really know what might have happened had I not prayed for them. The outcome could have been the same, but it also could have been vastly different. Often we find ourselves in situations where a person comes to mind and we don’t know why. When that happens, pray for the person. It certainly can’t hurt … and who knows, those prayers could thwart a potentially dangerous situation. We need to take those nudges of the Holy Spirit seriously. I’m glad I did! 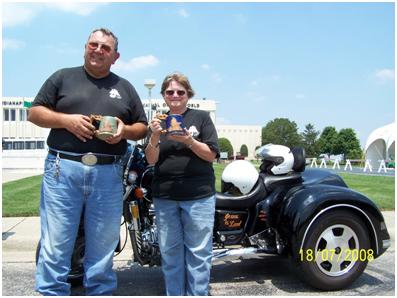